Summary
This is the blog of Elias Bizannes (oh, hai!). It started as a travel blog in 2005 when I went to 25 countries, and its evolved into the things that touch my interests. Well actually, now it’s more a case of when the inner writer in me has been channelled, such as when I get a thought I can’t shake and like a possessed monkey I keep typing until done. Usually I delete what I write, but sometimes I forget to delete and click publish.

(FYI it’s fun when people write comments — not that you can tell as I lost all previous comments due to a migration issue with a startup that managed it — but spam makes it exhausting so I shut them off pretty quickly.)

The header image
I took this picture while doing a trip into the Bolivian Amazon in December 2007. It symbolises why I have his blog:  the act of writing on the web helps develop my thinking into a tree of knowledge from the rich ecosystem that is this marvel of hypertext despite some nasty fucking piranhas nipping at me. Also, I don’t write for anyone other than myself and it’s why a picture from 2007 with my DLSR — odd given my 2020 smartphone takes way better pictures now — stays.

Since we’re talking about my Amazon trip, check out this dude who was one of the crocs that slept under our raised bunkers. He’s got a smile that makes you want to say “wazzzzup“. While you may think I am a crazy mofo for  jumping off the platform for this shot, which is a consensus view my close friends generally have of me, what is also important to know is the much bigger and aggressive Caimans swimming under us are not something you jump off a platform to take a shot. You see, dear reader, life’s all about taking calculated risks so you have a story to share. 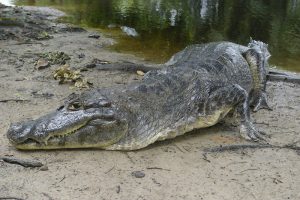 Um – how do you say your name
I’ve been blessed with not one, but two unpronounceable names.

My first name is pronounced eh – LEE – ah(S) (although sometimes I say it without the S – which is the informal version of my name in Greek grammar and where my name comes from). My surname is pronounced Biz A – kNEES.

My grandfather, also “Elias” and a Greek refugee who moved to Australia from Turkey, spelt it “Bizannes” versus the transliterated spelling of “Bizanis”. This is because he thought people would pronounce it more correctly. Grandpa, they ain’t.